Mera Merch is an indie clothing label that brings you the most amazing t-shirts and accessories online inspired by everything pop culture! Mera Merch offers a wide range of products from cool t shirts and sweatshirts to accessories like badges, posters, laptop skins and fridge magnets. A t-shirt is a perfect canvas to showcase your creativity, passion and personality. At Mera Merch, we work with some of the best designers and illustrators from all around the globe to offer you a fresh and unique selection of designer t-shirts.

If you’re looking for a t-shirt to help you express yourself and the things you love, we have you covered. Check out our collection of cool t shirts online in India. From funny t-shirts with epic parodies and hilarious one liners to intricate graphic designs inspired by your favourite movie and TV show characters. We have something for everyone! Our collection of online t shirts are screen printed to perfection on 100% cotton tshirts. We provide cash on delivery and free shipping all over India with a hassle free return policy to make sure you have a pleasant online shopping experience.

Flat 10% OFF on all orders. Use code MERAMERCH 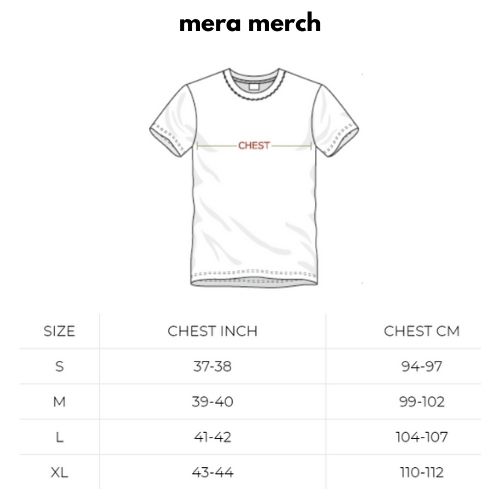 Show some EXTRA self love with this Official Joey Doesn’t Share Men’s Full Sleeve Printed T-Shirt. Team this Plus Size favourite, white t-shirt with a pair of distressed jeans, sneakers and a bracelet for a street style look.

One of our favourite characters from F.R.I.E.N.D.S., Joey has endeared us with his sweet mannerisms and dumb comments over the years. Never ready to share food but always ready to please a woman, he has made a permanent place in our hearts, just like Chandler, Monica, Ross, Rachel and Phoebe. He never fails to cheer us up and make us smile.

Joey comes from an Italian-American family of eight children, of which he is the only male. He is from, and presumably born in, Queens. As a child, he was extremely accident prone. In “The One With Ross’ New Girlfriend”, it’s implied that he was sexually abused as a child by a tailor, but did not realize this until Chandler went to the same place years later. As a child, he had an imaginary friend named Maurice, who was a space cowboy. He meets most of the friends (with the exception of Rachel) as a result of being Chandler’s roommate. Joey meets Rachel a while later, at Central Perk when she runs out on her planned wedding with Barry.

Joey is a stereotypical and a terrible actor: oversexed, under-educated, and constantly looking for work. He is also ordained as a minister in “The One With The Truth About London”, and he officiates at both Monica and Chandler’s and Phoebe and Mike’s weddings. It is revealed in “The One After ‘I Do'” that Joey has a size seven foot (European size 38.5), which he is secretive and defensive about. He also has a soft toy penguin named Huggsy (his “bedtime penguin pal”), which he is very fond of and does not like to share with others. In “The One With Ross and Monica’s Cousin”, it is revealed that as was common with Catholic boys, Joey is circumcised.

Choose your desired color, select your size, and click ‘Add to Cart’.

You can search for millions of merchandise and tshirts with great discounts, FREE Shipping and 7-days hassle free returns on Mera Merch.
What is your return policy ?

You can return your order within 7 days.